For the many low wage Amazon workers — both full time and temporary — set to receive a raise thanks to the just announced boost in minimum pay to $15/hour, the news is certainly a big plus. It should also be noted that had Amazon not been subject to intense scrutiny and criticism from the likes of Bernie Sanders and others, Jeff Bezos never would have responded with such an aggressive move. That said, if you think a little beyond the surface level about why he’s doing this now and what his real motives are, it becomes clear nobody should take this move at face value.

Stacy Mitchell, co-director at the Institute for Local Self-Reliance, is someone whose work on Amazon I’ve cited on various occasions. She tweeted out an important thread this morning that helps you take a step back and not miss the forest for the trees. 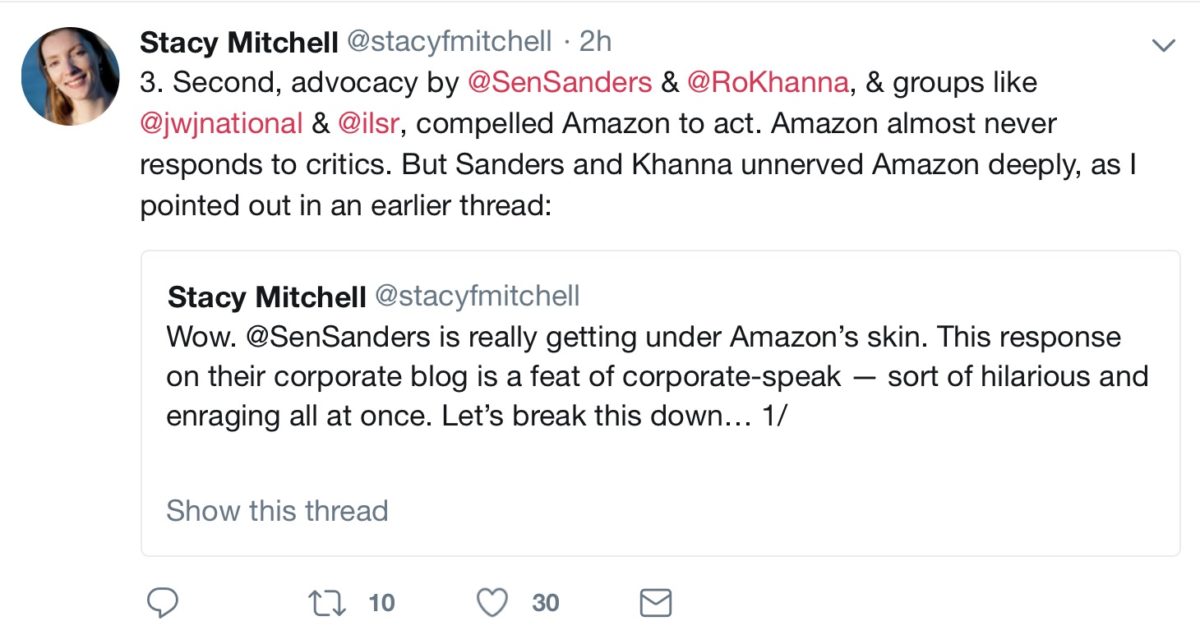 Bezos is naturally attempting to portray this as a come to Jesus moment, but you shouldn’t buy his spin for a second. Based on what we know of his business practices, the guy’s built the behemoth that is Amazon by operating in a Machiavellian fashion (see my recent post: Amazon is Far More Dangerous and Powerful Than You Want to Admit).

The real tell here is Bezos’ immediate emphasis on raising the national minimum wage to $15 an hour under the law. Pushing for a forced across the board wage hike everyone knows Amazon can cope with better than current or potential competition, makes his company look good while likely harming other business models in the process.

This is how Bezos rolls, he’s willing to take short-term hits to dominate a market. What sacrifice is a wage hike if he assumes everyone else will have to do it as well? He knows Amazon’s got the resources and capability to automate in a way others simply can’t. Bezos see this as a win-win if he can also get everyone to pay $15 an hour. He gets to look like a leader, while also positioning Amazon for even greater market dominance in the long-run. You really think Bezos is advocating for a national minimum wage increase because he’s suddenly a Bernie Sanders populist? Don’t be stupid.

Which brings us to the next point. While Bezos’ well documented piss poor treatment of low level employees is well documented, Amazon poses a much larger threat in other respects. It’s not just the company’s increased ties to the U.S. military and intelligence agencies, though that’s dangerous enough. The company’s largest threat resides in its desire to not just dominate the market, but to become the market itself.

As Stacy Mitchell noted in her excellent 2017 article:

To describe Amazon as a retailer is to misunderstand what the company actually is, and to miss the depth of the threat that it poses to our liberty and the very idea of an open, competitive market.

It’s not just that Amazon does many things besides sell stuff—that it manufactures thousands of products, from dress shirts to baby wipes, produces hit movies and television shows, delivers restaurant orders, offers loans, and may soon dispense prescription drugs. Jeff Bezos is after something so much bigger than any of this. His vision is for Amazon to control the underlying infrastructure of the economy.Amazon’s website is already the dominant platform for digital commerce. Its Web Services division controls 44 percent of the world’s cloud computing capacity and is relied on by everyone from Netflix to the Central Intelligence Agency. And the company has recently built out a vast network of distribution infrastructure to handle package delivery for itself and others.

Jeff Bezos is a highly intelligent and cutthroat individual. He’s able to see multiple steps ahead of most people, and this move to raise wages is a perfect example. He figures he can look like the good guy in the near-term, while solidifying market dominance and monopoly power in the big picture. Bezos plays the long game and he plays it really well. Don’t take your eye off the ball or believe the hype for a minute.

Don’t give Jeff Bezos any credit. He’s Machiavellian.
This isn’t coming from a good place.

You can think it’s good Amazon employees are getting a wage increase and also understand Bezos is not coming from a good place.
These two things are not mutually exclusive.

If you liked this article and enjoy my work, consider becoming a monthly Patron, or visit our Support Page to show your appreciation for independent content creators.

Via This Is Hell

No competition: How Amazon swallowed the economy.

What you have is not a market – this is not an open market in which people can buy or sell goods freely and of their own accord. What you have is a private arena that is controlled by a single player. It would be as if Walmart not only set up a store on the edge of town, but bought up all the other real estate and got to decide which companies got the choice spots, how much rent they had to pay, when they could open, what they could sell – this is essentially a dictator over the commercial sphere.

Policy researcher Stacy Mitchell examines the rise and risk of Amazon’s ascendant monopoly – as a platform that replicates and then erases its competition, a force beyond anti-monopoly regulations that stifles innovation, job creation and wages across industry, and a centralized economic power increasingly making policy decisions on its own terms.

Stacy Mitchell wrote the article Amazon Doesn’t Just Want to Dominate the Market—It Wants to Become the Market for The Nation.

Don’t Just Give Thanks. Pay Your Blessings Forward